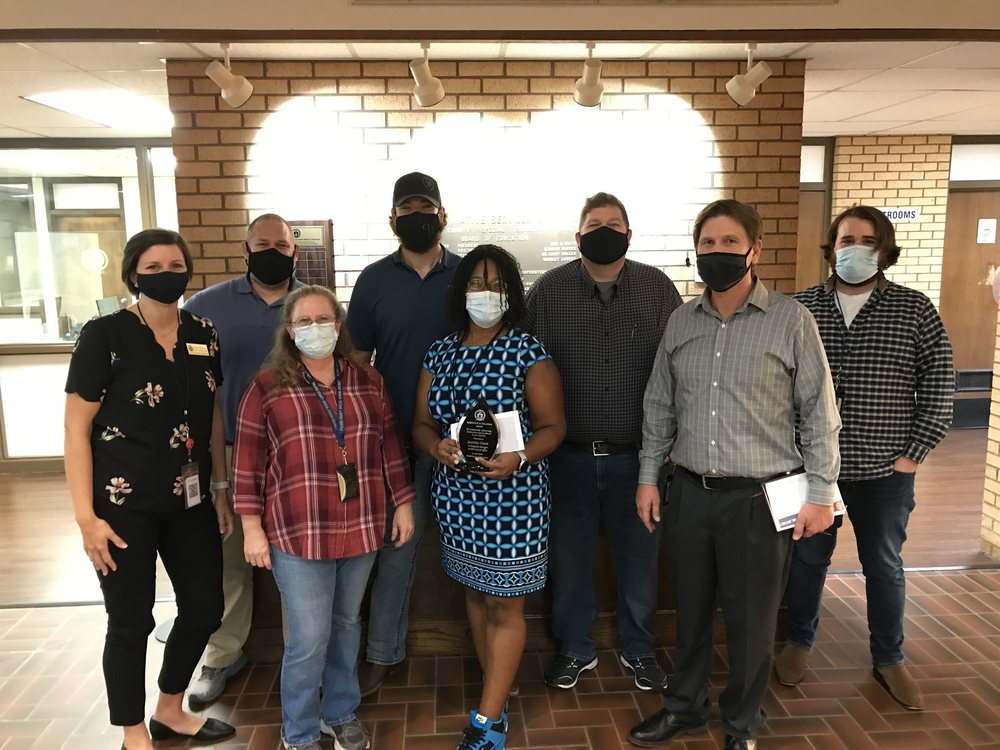 PULASKI COUNTY, Ark. - The Pulaski County Special School District Board of Education presented the 1st quarter of the 2020-2021 school year Inspiration in Education Award  award to Juanita Croon, Helpdesk Manager for the district’s IT department. The award presentation took place during the October board meeting held virtually on Tuesday, October 13, 2020.

The PCSSD communications department received nearly 50 nominations for the Inspiration in Education Award this quarter, including four building principals. Croon was one of 14 candidates who received votes for the award from the superintendent’s cabinet.

Her colleague, John Dixon, submitted her nomination. Dixon, a field service technician for the IT department, has known Croon for four years. In his nomination, Dixon points out how Croon joined the IT department after the previous helpdesk manager unexpectedly passed away. Without hesitation, Croon stepped into the role and far exceeded the job description requirements, according to Dixon.

“She has tirelessly worked at the help desk evaluating and resolving PCSSD user issues,” Dixon wrote in his nomination form. “She has acted in multiple roles needed by the IT Department at any given time. She acts as a liaison between the IT Department and parents, teachers and other departments or maintaining inventory of all district technology. “

During the board meeting, Croon received several compliments from the board and IT team. Board member Tina Ward pointed out her appreciation for the extra steps Croon made to ensure that her grandson received his chromebook after it was turned in for repair. Additionally, superintendent Dr. Charles McNulty thanked Croon for her positive attitude and dedication to the position.

“Juanita is the one we all go to to get the information and direction we need to keep moving forward, as a team, for our students, our teachers and our PCSSD family,” Dixon said.

When she’s not manning the phones at the IT helpdesk, Croon is a mother and attends college. Along with the honor of being selected, Croon received a plaque and a check for $250.

The Board of Education created the Inspiration in Education Award to honor certified and support staff members who are inspirational to their students or colleagues in their roles at PCSSD. Additionally, the award recognizes employees who exhibit traits including leadership, mentoring, dedication, excellence and effectiveness in their places of work.

The Inspiration in Education award is presented to the winner quarterly in October, December, February and May. Anyone -- a colleague, student, patron of the district, board member, etc. -- may nominate a PCSSD employee for the award. The applications will be reviewed by the Superintendent's Cabinet for ranking, and the highest scorer will be named the quarterly winner and receive the award from the PCSSD Board of Education.